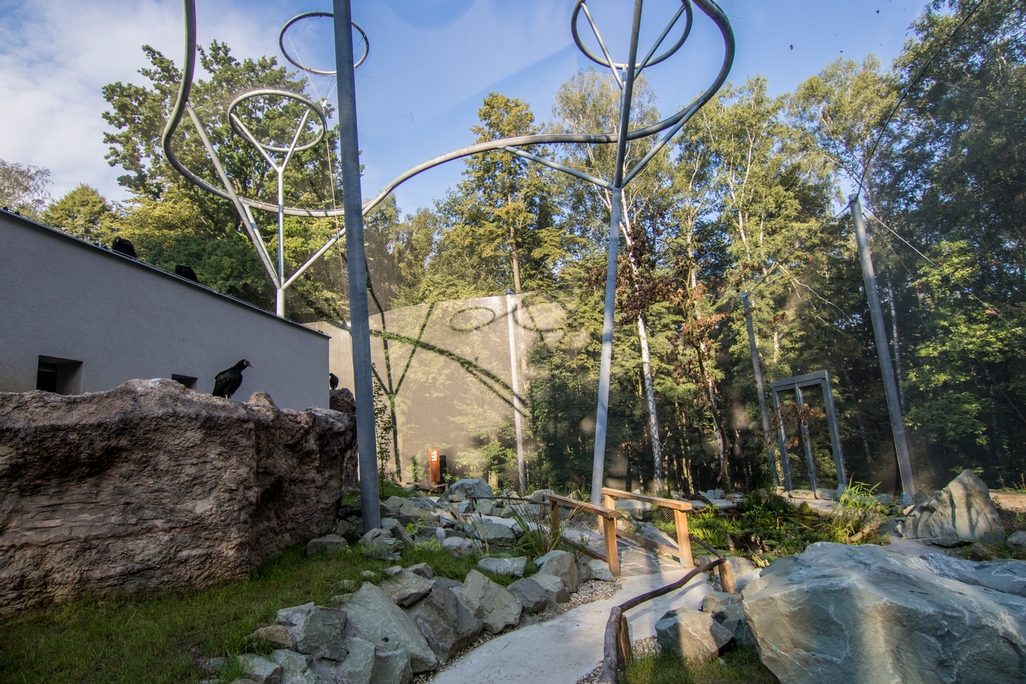 The La Pampa aviary is walk-through, so you can enter it and enjoy the presence of its inhabitants up close. The dominant feature of the aviary is a group of American black vultures, but there are also other South American birds and one representative of mammals – Brazilian guinea pigs.

The aviary was named after the province of La Pampa in central Argentina, where three areas with different climates and vegetation meet: Pampas (an area with quality black soil), Espinal (dry thorny forests and savannas) and Monte (arid semi-desert with thorny bushes). Rainfall decreases rapidly from east to west and from north to south. Temperatures also vary greatly in different parts of the province, and there are large temperature differences (from -17 to +45°C) between the warmest and coldest months.

It occurs from the centre of the USA to the centre of Chile and Argentina in open countryside or sparse forests. It searches for food with its eyes or lets itself be guided by other scavengers who have a better sense of smell (e.g. turkey vulture), but it also actively hunts. Most often it eats insects, small vertebrates and even fruits and often bird and turtle eggs, too. It also preys on waste from human settlements. Females lay 2 eggs, which are incubated for 38-45 days. As the only one of the seven living species of condors, it has dark-coloured featherless parts on the head and neck.

It inhabits open landscapes such as meadows, pastures and fields, but also swampy valleys and hilly heaths along lake and river edges. It occurs in southern Argentina, southern and central Chile and western Peru. Southern populations from Chile and Argentina migrate to pampas in northern Argentina during the winter, while populations in Peru are sedentary. They most often form flocks of 3-12 birds, but nest in colonies of 10-50 pairs. Nesting pairs use dry branches, grass, and reeds to build a nest. It feeds on insects, worms, frogs and rodents.

Yellow-billed pintails are slender floating ducks. Elongated tail feathers are typical for them. The yellow-billed pintail has a yellow beak with a black stripe in the middle. It lives in wetlands from mountain lakes to lowland rivers and lakes as well as in coastal waters. Three subspecies are described. The subspecies bred in our zoo is the most widespread (it occurs in southern Colombia, Peru, Brazil, Bolivia, Chile, Argentina, Paraguay, Uruguay and the Falkland Islands), another one inhabits only South Georgia and the third one, which lived in central Colombia, is considered exterminated since the 1950s.

This representative of rodents inhabits the South American pampas. It uses underground burrows or shrubs to hide. Unlike the domestic guinea pig, it has an inconspicuous colour, the coat is brownish-grey to brownish-black, the body is not so bulky. It lives in colonies numbering 5-10 individuals. After 62 days of gestation, the female gives birth to 1-5 (usually 2-3) young. They are hairy, they can see and they usually run around briskly already a few hours after birth. Due to the relatively large range and its occurrence at an altitude of 400 to 3,000 m above sea level, it does not yet belong to threatened species.