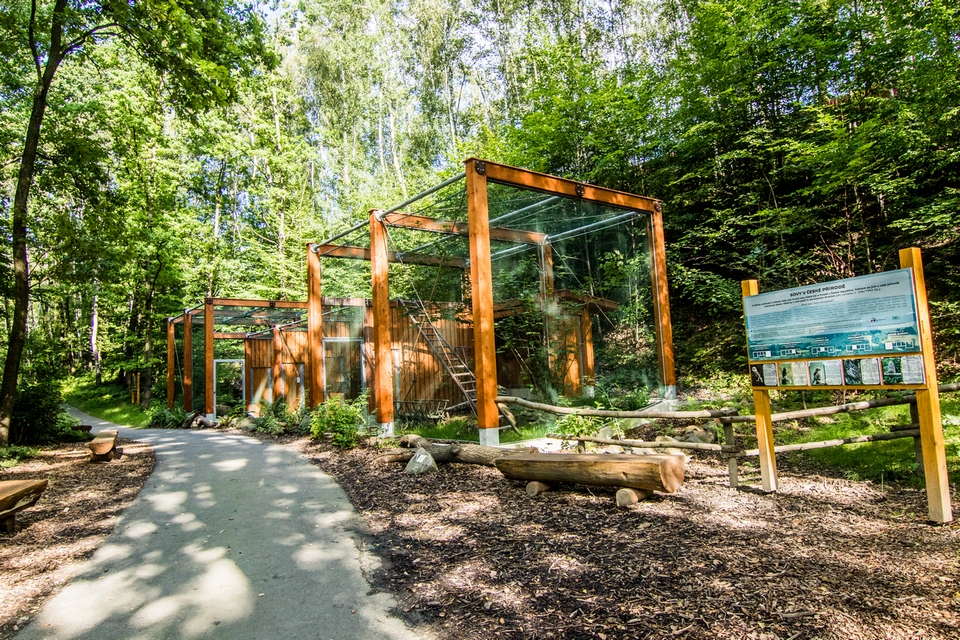 The complex of five aviaries was created on the Water Path. Their inhabitants are selected species of our owls. In all cases, these are rare and endangered species of Czech nature and the Ostrava Zoo has long been involved in their conservation - whether by participating in rescue breeding programs in human care, providing naturally reared young free of charge for release into the wild, or educating the general public.

Owls occupy very diverse habitats - from forests to parks and orchards to human settlements. Aviaries present not only rare birds, but also the environment that the individual species inhabit (tree cavities are replaced by nesting boxes here):

Together with the little owl, it belongs to the highly endangered owl species in our country. It hunts mainly small mammals, on which it is existentially dependent. It used to nest, for example, in church towers, but now it nests almost exclusively in agricultural buildings. Today, almost the entire population of this owl in the Czech Republic nests in man-made nesting boxes.

Currently it is our most endangered owl. The prey of little owls is insects and earthworms, i.e. animals that are rapidly declining. In total, less than a hundred pairs nest here. Until 50 years ago, it was one of our most abundant species. Today, in our country, the little owl is tied exclusively to human dwellings. In order not to completely disappear from the Czech Republic, a conservation program is being prepared for this species.

Our smallest owl - but certainly not in terms of its courage. It can hunt prey as big as itself, whether it is mammals or birds. It most often nests in coniferous forests in cavities made by the great spotted woodpecker. It constantly cleans this cavity carefully, so we can always find the remains of prey under it.

It belongs to the small species of owls. Its favourite nesting grounds are cavities carved in old beeches by the black woodpecker. This owl does not hoot like most other owls, but its voice is a melodic call that sounds like a faint high “pooh pooh pooh”. In some areas, boreal owls often use nesting boxes to nest.

It used to be very rare in the Czech Republic. Since 1983, when it first nested in the Beskid Mountains, it has been thriving in both northern Moravia and in the Bohemian Forest. Its numbers are growing successfully. Ural owls can intensively defend their young on the nest and can even attack humans. The main food is small rodents.